BESPONSA®(inotuzumab ozogamicin) is indicated for the treatment of adults with relapsed or refractory B-cell precursor acute lymphoblastic leukemia (ALL).

CR/CRi was a primary endpoint and was analyzed in the first 218 patients randomized (remission analysis population) per the statistical plan.3 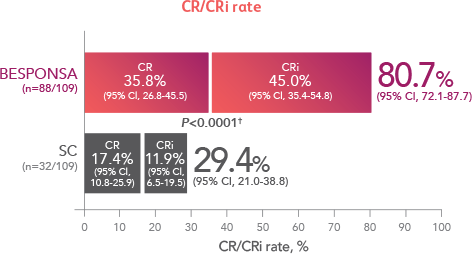 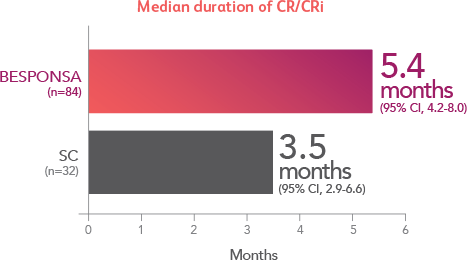 MRD was a secondary endpoint analyzed among responding patients in the first 218 patients randomized.3 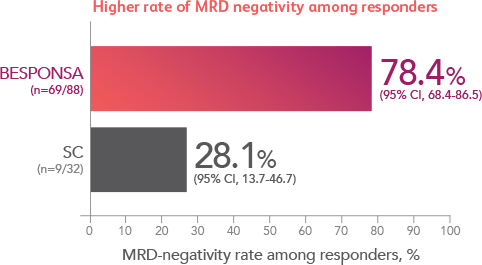 The analysis of MRD-negativity rate by cycle was not prespecified and is analyzed among responding patients in the full ITT population (N=326).3

CR/CRi rates were evaluated across a range of patients2,3

These subgroup analyses were exploratory and not powered to detect statistical significance. Small patient numbers and lack of multiplicity adjustments can be a limitation of these analyses. No conclusion about efficacy in subgroups can be drawn from these data.

These subgroup analyses were exploratory and not powered to detect statistical significance. Subgroup data for CR/CRi rates are presented in the full forest plot. Small patient numbers and lack of multiplicity adjustments can be a limitation of these analyses. No conclusion about efficacy by subgroup can be drawn from these data.

Additionally, MRD-negative CR/CRi rates are presented for the selected subgroups below. MRD negativity rates are derived from a central laboratory subgroup analysis in patients achieving a CR/CRi per EAC from the ITT218 population.

In the INO-VATE ALL study, HSCT rates more than doubled with BESPONSA vs SC2,3

*This rate represents the percentage of patients who proceeded directly to HSCT without the use of additional or follow-up induction therapies.

BESPONSA demonstrated a median OS of 7.7 months vs 6.2 months with SC and a 25% relative reduction in the risk of death2,3

The analysis of OS did not meet a prespecified boundary for statistical significance of P=0.0104.

Clinical variables predictive of OS in the INO-VATE ALL study4

A multivariate analysis using stepwise Cox regression modeling identified the following clinical variables associated with improved OS for each arm. Only patients with measurements for relevant variables were included. Small patient numbers are a limitation of these analyses.