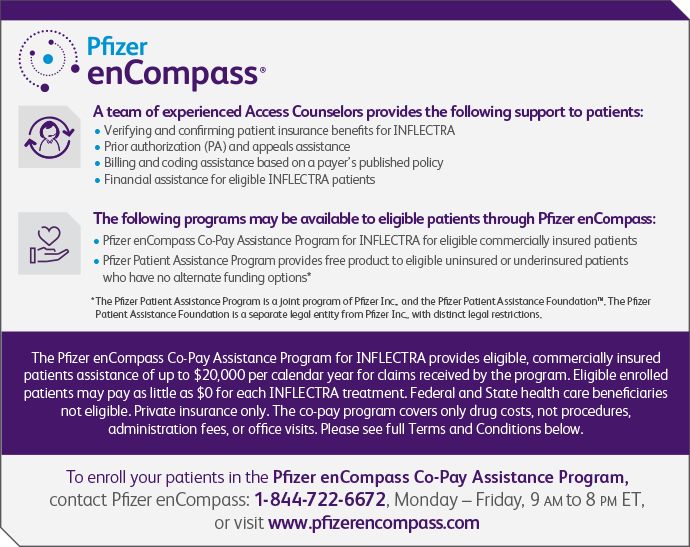 The Pfizer enCompass Co-Pay Assistance Program for INFLECTRA is not valid for patients that are enrolled in a state or federally funded insurance program, including but not limited to Medicare, Medicaid, TRICARE, Veterans Affairs health care, a state prescription drug assistance program, or the Government Health Insurance Plan available in Puerto Rico (formerly known as “La Reforma de Salud”). Program offer is not valid for cash-paying patients. With this program, eligible patients may pay as little as $0 co-pay per INFLECTRA treatment, subject to a maximum benefit of $20,000 per calendar year for out-of-pocket expenses for INFLECTRA including co-pays or coinsurances. The amount of any benefit is the difference between your co-pay and $0. After the maximum of $20,000 you will be responsible for the remaining monthly out-of-pocket costs. Patient must have private insurance with coverage of INFLECTRA. This offer is not valid when the entire cost of your prescription drug is eligible to be reimbursed by your private insurance plans or other private health or pharmacy benefit programs. You must deduct the value of this assistance from any reimbursement request submitted to your private insurance plan, either directly by you or on your behalf. You are responsible for reporting use of the program to any private insurer, health plan, or other third party who pays for or reimburses any part of the prescription filled using the program, as may be required. You should not use the program if your insurer or health plan prohibits use of manufacturer co-pay assistance programs. This program is not valid where prohibited by law. This program cannot be combined with any other savings, free trial or similar offer for the specified prescription. This program is not health insurance. This program is good only in the U.S. and Puerto Rico. This program is limited to 1 per person during this offering period and is not transferable. No other purchase is necessary. Data related to your redemption of the program assistance may be collected, analyzed, and shared with Pfizer, for market research and other purposes related to assessing Pfizer’s programs. Data shared with Pfizer will be aggregated and de-identified; it will be combined with data related to other assistance redemptions and will not identify you. Pfizer reserves the right to rescind, revoke or amend this program without notice. This program may not be available to patients in all states. For more information about Pfizer, visit www.pfizer.com. For more information about the Pfizer enCompass Co-Pay Assistance Program, call Pfizer enCompass at 1-844-722-6672, or write to Pfizer enCompass Co-Pay Assistance Program, P.O. Box 220040, Charlotte, NC 28222. Program terms will expire at the end of each calendar year. Before the calendar year ends, you will receive information and eligibility requirements for continued participation.

Keep Up With INFLECTRA

Pfizer can provide you with resources to help inform your use of INFLECTRA.

Register for the latest INFLECTRA news