This indication is approved under accelerated approval based on tumor response rate and duration of response. Continued approval for this indication may be contingent upon verification and description of clinical benefit in a confirmatory trial.

Making your patients’ support needs a priority.
Together.

At Pfizer Oncology Together, patient support is at the core of everything we do. We’ve gathered resources and developed tools to help patients and their loved ones throughout LORBRENA treatment. From helping to identify financial assistance options to connecting patients to resources for emotional support, your patients’ needs are our priority.

FRMs are trained resources who can help address specific access issues—in person or over the phone. They can help educate your staff on our access and reimbursement resources and help address challenging or urgent Pfizer Oncology patient cases you have sent us. 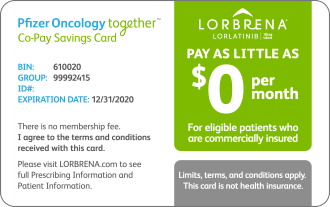 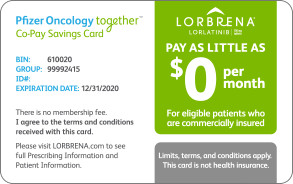 †Limits, terms, and conditions apply. Patients are not eligible to use this card if they are enrolled in a state or federally funded insurance program, including but not limited to Medicare, Medicaid, TRICARE, Veterans Affairs health care, a state prescription drug assistance program, or the Government Health Insurance Plan available in Puerto Rico. Patients may receive up to $25,000 in savings annually. The offer will be accepted only at participating pharmacies. This offer is not health insurance. No membership fees apply. Pfizer reserves the right to rescind, revoke, or amend this offer without notice. For any questions, please call 1-877-744-5675, visit PfizerOncologyTogether.com/terms or write: Pfizer Oncology Together Co-Pay Savings Program, 2250 Perimeter Park Drive, Suite 300, Morrisville, NC 27560.
Medicare/Government Insured
Help identifying resources for eligible patients with Medicare/Medicare Part D, Medicaid, and other government insurance plans:
‡If support from independent charitable foundations or Medicare Extra Help is not available, Pfizer Oncology Together will provide eligible patients with medication for free through the Pfizer Patient Assistance Program. The Pfizer Patient Assistance Program is a joint program of Pfizer Inc. and the Pfizer Patient Assistance Foundation™. The Pfizer Patient Assistance Foundation is a separate legal entity from Pfizer Inc. with distinct legal restrictions.
Uninsured
Help identifying resources for eligible patients without any form of healthcare coverage:
§The Pfizer Savings Program is not health insurance. For more information, call the toll-free number 1-877-744-5675. There are no membership fees to participate in this program. Estimated savings are 50% and depend on such factors as the particular drug purchased, amount purchased, and the pharmacy where purchased.
To download an enrollment form,
visit PfizerOncologyTogether.com.
Back to top

PERSONALIZED PATIENT SUPPORT
Tailoring support to patients’ daily needs.
Together.
When your patients need support for their day-to-day challenges, we want to be a place they can turn to for help. That’s why Pfizer Oncology Together provides patients prescribed our medications with a dedicated Care Champion. Our Care Champions, who have social work experience, are ready to listen to patients and then connect them to resources that may help with some of their daily needs.||
Emotional Support
We can connect patients to resources for emotional support and other daily challenges. These resources include support groups, an independent organization's helpline, and a free app designed to help patients connect with loved ones.
Transportation and Lodging
We can connect patients to an independent organization that helps eligible patients find rides and lodging for treatment-related appointments.
Workplace Guidance
If patients are leaving work for a time, or preparing to return to work, we can send them information that may help make the transition easier.
Ongoing Education
We can provide patients with information on living with their condition, including nutritional information, communication tips, and toolkits specific to their prescribed medication.
Financial Support
We can help patients identify financial assistance resources—regardless of their insurance coverage.
||Some services are provided through third-party organizations that operate independently and are not controlled by Pfizer. Availability of services and eligibility requirements are determined solely by these organizations.
Patients can sign up online, at
PfizerOncologyTogether.com.