For optimal immune response, complete all 4 doses of Prevnar 13® on time, based on ACIP and AAP recommendations1-3 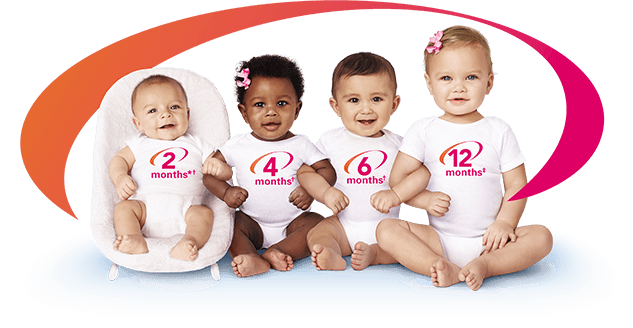 Scheduling the fourth dose for 12 months allows for unforeseen delays, and therefore may help with timely completion of the full series
Additional dosing information

For children 7 months through 5 years of age who have not received Prevnar 13®, one of the following three schedules should be used based on the child’s age when administered the first dose.1

For children and adolescents 6 years through 17 years of age who have not previously received Prevnar 13®, Prevnar 13® should be administered as a single dose.1

*At 2, 4, 6, and 12 to 15 months of age. In children 6 years through 17 years of age, Prevnar 13® is administered as a single dose.1
†The first dose may be given as early as 6 weeks of age.1
‡The recommended dosing interval for the first, second, and third doses is 4 to 8 weeks.1
§The fourth dose should be administered at approximately 12 to 15 months of age and at least 2 months after the third dose.1
||Pneumococcal 7-valent Conjugate Vaccine (Diphtheria CRM197 Protein).
AAP=American Academy of Pediatrics; ACIP=Advisory Committee on Immunization Practices.
Back to top 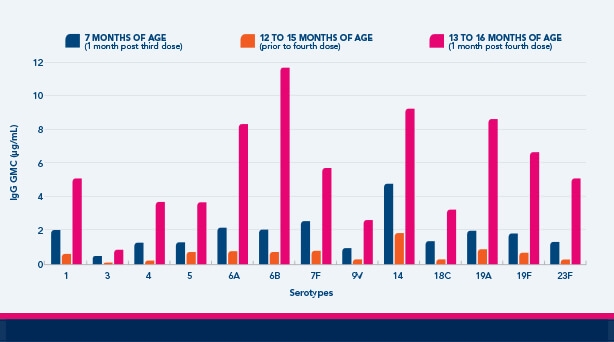 Phase 3, double-blind, active-controlled, multicenter trial involving 666 infants randomized to receive 4 doses of Prevnar 13® (n=334) or Prevnar®|| (PCV7) (n=332) given at 2, 4, 6, and 12 to 15 months of age. A total of 294 infants in the Prevnar 13® group completed the first 3 doses, of which 252 were evaluable for immunogenicity. A total of 264 toddlers received the fourth dose of Prevnar 13®, of which 239 were evaluable for immunogenicity. Pneumococcal antipolysaccharide IgG GMCs were calculated from blood samples taken 1 month after the third dose, before the fourth dose, and 1 month after the fourth dose. The mean age at the fourth dose in this study was 12.4 months.4

Among children, the highest rates of IPD occur in those under 2 years of age5
Prevnar 13® immunogenicity

Back to top
Pfizer Home