Clinical studies
In a clinical study of 37,816 patients randomized to Prevnar®† (PCV7) or a control vaccine, PCV7 demonstrated powerful efficacy against IPD in patients fully vaccinated with the 4-dose series1* 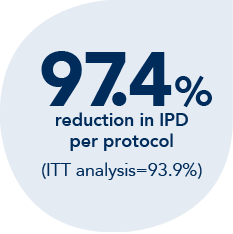 Based on the existing efficacy data and approval of Prevnar®† (PCV7), Prevnar 13® was approved by the FDA using immune response data as a surrogate end point for efficacy1
Back to top 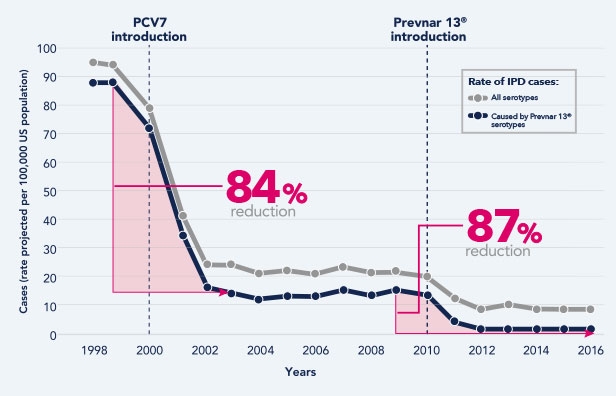 CDC surveillance data are observational data only. A direct effect of Prevnar 13® cannot necessarily be determined from these data.

IPD can be caused by more than 90 identified Streptococcus pneumoniae serotypes. In 2000, PCV7 was licensed and indicated for active immunization of infants and toddlers against invasive disease caused by S. pneumoniae due to capsular serotypes included in the vaccine (4, 6B, 9V, 14, 18C, 19F, and 23F); from 1978 through 1994, these 7 serotypes were responsible for approximately 80% of IPD cases in children <6 years of age in the United States.3

Based on incidence rates from 1998 through 2016 collected through the National Notifiable Diseases Surveillance System (NNDSS) and the Active Bacterial Core surveillance (ABCs) system run by the CDC.2