PRISTIQ 50 mg delivered effective relief from MDD symptoms and a reduced risk of relapse in PRISTIQ responders1,2
Back to top

*A validated, self-rated measure of functional impairment.
Back to top
Back to top

Study description
Pooled data from two double-blind, randomized, placebo-controlled, fixed-dose, 8-week studies of 50 mg qd (n=314) and 100 mg qd (n=305) of PRISTIQ vs placebo (n=311) in adults aged 18 and older with MDD. The primary end point was change in HAM-D17 total score vs placebo from baseline at week 8. Final on‑therapy value was defined as the last on-therapy evaluation, regardless of the number of days on therapy, with last-observation-carried-forward (LOCF) statistical analysis.1 Only 50 mg vs placebo data shown.
The Hamilton Rating Scale for Depression is a 17-item, validated, observer-rated scale that assesses depressive symptoms. It is one of the most widely used instruments for the clinical assessment of depressive states. The rater evaluates the severity of symptoms on the basis of information gained during an interview. Symptoms are rated on either a 5-point or 3-point scale, the latter being used when quantifying the variable is difficult or impossible.6
Items comprising HAM-D17 total score for depression5,6
Back to top
Back to top

Relapse
In the 6-month, double-blind phase of a maintenance trial,
PRISTIQ 50 mg reduced the probability of relapse by more than half vs PRISTIQ responders on placebo at day 185 (P<0.001)2

Relapse in the double-blind phase was defined as any one or more of the following2:
Study description
Data from a multicenter, double-blind, placebo-controlled, randomized-withdrawal, parallel-group study in adults aged 18 or older with MDD. The study consisted of a 10-day screening period, 8-week open-label response phase (N=874), 12-week open-label stability phase (N=659), and 26-week placebo-controlled maintenance phase (N=548). Patients who responded to PRISTIQ 50 mg per day in the 8-week phase and had continuing stable response through week 20 were randomly assigned to receive placebo (n=276) or PRISTIQ 50 mg per day (n=272) in the 6-month, double-blind, randomized-withdrawal phase. The primary efficacy end point was time to relapse following randomization compared with placebo. Subjects who relapsed after double-blind day 185 or completed the double-blind therapy without relapse were considered as censored on double-blind day 185.2 Longer-term efficacy of PRISTIQ (50 mg to 400 mg) was established in two maintenance trials.

PRISTIQ for MDD
Proven efficacy with a low discontinuation rate* due to adverse events and a reduced risk of relapse in PRISTIQ responders1,2
*In a pooled analysis of 8-week studies, discontinuation rates were 4.1% with PRISTIQ 50 mg vs 3.8% with placebo. 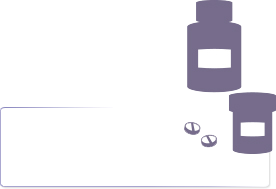