RETACRIT offers the potential to help address treatment costs, while maintaining the established clinical efficacy and safety of epoetin alfa—brought to you by Pfizer, a committed leader in biosimilar innovation and development.2

*Biosimilar means that the biological product is approved based on the data demonstrating that it is highly similar to an FDA-approved biological product, known as a reference product, and that there are no clinically meaningful differences between the biosimilar and the reference product.3
†RETACRIT does not have a designation of interchangeability with Epogen/Procrit.
‡WAC is a manufacturer’s undiscounted or list price to wholesalers/direct purchasers and, therefore, is not inclusive of discounts to payers, providers, distributors, and other purchasing organizations.2
§As of July 2020. 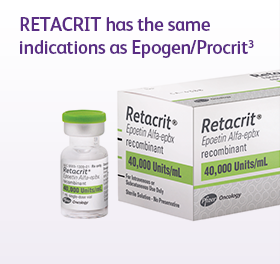